Iceland is about the size of Pennsylvania, but has the population of Pittsburgh, making it the most sparsely populated country in Europe. As a country known for its volcanic and geologic activity, it is the perfect destination for a civil engineering student to study abroad.

Sam Barone, Charles E. Via, Jr. Department of Civil and Environmental Engineering senior, spent his spring 2015 semester in Iceland. The exchange program was through Virginia Tech, but he took courses at the University of Iceland. It was the first year that the program was open to Virginia Tech students. Sam, along with three students from the College of Natural Resources, participated in the program.

Sam had the unique experience of studying abroad as a senior. He recommends this to others looking to study abroad because “I was able to take almost any course that I wanted since I had so many prerequisites.” In Iceland, a bachelor’s degree takes three years and master’s degree takes two years. As a fourth year student, he was able to take graduate courses, which allowed him to choose from a larger selection of courses.

He took Coastal Engineering, Geothermal Energy, Environmental Economics, and Introduction to Icelandic Culture. “I wish I had the opportunity to take more classes while I was there,” he noted.

While the natives speak Icelandic, many of the classes at the university were offered in English. In fact, the majority of natives also speak English, though at times, especially while shopping at markets or restaurants, Sam had to rely on his limited knowledge of the Icelandic language.

“It was a cool experience and I became more globalized,” Sam said. “I was able to meet other people and see how other countries approach civil engineering.” He continued that he thinks these skills will help him throughout his career.

While Sam has traveled to Canada, this was his first time having the opportunity to immerse himself in a different culture. “Since Iceland is so small, I really got to experience all of it,” he said. “I had a tight-knit group of friends from all over the world. Almost every weekend, we would rent a car and go somewhere.” As a result, he got to experience the entire country, and make some lifelong friends around the world. “My favorite part is definitely the friends that I met from all over the world. I still talk to them frequently on social media.”

Following graduation in May 2016, Sam is planning to accept a job working in marine construction. Eventually, he would like to work for a big coastal engineering company with offices throughout the world.

He highly encourages other civil and environmental engineering students to pursue the program in Iceland. There are scholarship opportunities for graduate students through the Keifur Eiriksson Foundation. Undergraduates can find more information about studying at the University of Iceland through the Virginia Tech Global Education Office. 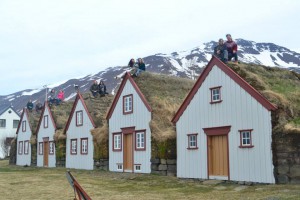