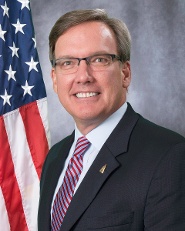 Blacksburg, Va., Sept 9, 2014 – The Honorable Stephen T. Ayers, the Architect of the Capitol, Washington, D.C. will deliver the Vecellio Distinguished Lecture on Friday, Oct. 3, at 4 p.m. at Holtzman Alumni Center Auditorium at The Inn at Virginia Tech.

His talk, “Serve, Preserve, and Inspire” is open to the general public.

Ayers is the 11th Architect of the Capitol, nominated to his position by President Barack Obama. In his position, Ayers provides a wide range of professional expertise and services to preserve and enhance the U.S. Capitol.

His talk will provide an overview of current Capitol projects such as the Dome Restoration Project and will showcase efforts to preserve the historical buildings on Capitol Hill.

Prior to his current position he was a general engineer with Voice of America and served as an officer in the U.S. Air Force.

He is a Fellow of the American Institute of Architects, and an accredited professional in Leadership in Energy and Environmental Design. In 2011, Ayers received the Construction Industry Institute’s Carroll H. Dunn Award for Excellence.

The Vecellio Distinguished Lecture Series is sponsored by a $1 million endowment provided for the Construction Engineering and Management Program in Virginia Tech’s Via Department of Civil and Environmental Engineering by the Vecellio Family Foundation and individual family members: the late Mrs. Leo (Evelyn) Vecellio, Sr.; Leo and Kathryn Vecellio, Jr. and their sons, Christopher and Michael; and Patricia Vecellio.

The Vecellio endowment at Virginia Tech also supports scholarships, fellowships and a professorship.