The Virginia Tech campus is constantly changing. Just this summer, there have been over 300 construction, maintenance and renovation projects. Many of these construction projects are to classroom buildings and dorms. However, the most noticeable change to campus has been the new traffic pattern on the Drillfield. Two roundabouts were added to the north end of the Drillfield; one near McBryde Hall and the other near Eggleston Hall.

The idea was sparked from the desire to create a left turn from Alumni Mall onto Drillfield Drive. Previously, drivers could only turn right and had to drive around the Drillfield to get to Kent Street. “When I thought about it, I realized we had enough space and existing pavement to make two roundabouts with two way traffic from Stanger Street to Kent Street and the left turn from Alumni Mall,” said Michael Dunn, Virginia Tech’s Transportation Planning Engineer. “The two roundabout concept later morphed into two raindrop shaped traffic loops to reduce cost.” The two roundabouts still allow 360 degree travel when they are used together.

Dunn is a Charles E. Via, Jr. Department of Civil and Environmental Engineering alumnus of 1994. He is responsible for the management of major renovations and construction projects for new parking and transportation facilities, coordinating long-range traffic impact and parking studies, as well as taking a look at the past, current, and future impacts and usages of the transportation systems at Virginia Tech. Most recently, he played an integral role in the new traffic pattern on the Drillfield.

Creating a left turn from alumni mall was not the sole motivation for the change. The main goal was to improve traffic in the area to influence safety and limit traffic on the Drillfield. Roundabouts are safer than most other intersections. According to the Federal Highway Administration, roundabouts improve safety for pedestrians by reducing the speed of cars through the area. Drillfield traffic will be reduced since cars traveling from Stanger Street to Kent Street will no longer need to drive around the Drillfield, which can take a significant amount of time due to pedestrian traffic. It also reduces pedestrian and vehicle conflicts in the area.

The roundabouts were open to traffic on August 15, 2015, days before families and students returned to campus for move-in. However, the planning process started over two years ago. Design started in 2013, with the final design approval taking place in December 2014. Several traffic patterns were explored before the choice for the two teardrop shaped roundabouts was reached. Among those options were full 360 degree roundabouts, a simple two-way road design, and changing the pedestrian pathways, transit stops and parking configurations. The current design was the best balance for cost, turning movements, parking, pedestrians and bikes. Construction started in May and was completed less than two months later.  Signs were also added to help vehicles and pedestrians find their way around.

“I think it looks great and seems to be working well. The true test will be when classes start,” said Dunn. He does expect challenges, mainly regarding people following the new pattern. This includes pedestrians using the crosswalks and vehicles and bikes reading the new road signs.

With Virginia Tech’s goal of enrollment growth over the next few years, there are several other major transportation projects on the horizon. Among those are the Southgate Interchange. The Virginia Department of Transportation is building a new grade-separated interchange to allow for the expansion of the Virginia Tech Montgomery Executive Airport. Plans are also underway for a western perimeter road and an overall campus parking and transportation master plan. As the Hokie Nation continues to grow, we expect more changes to campus over the coming months and years. 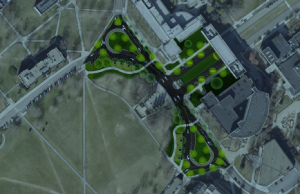